This staged project was definitely one of the most fun assignments I have had, but also one of the most challenging. The subjects (aka, Stephanie and Josh) were more than happy to help me at first, but things seemed to change once I started shooting. Call it being “camera shy”, but it was a struggle for them to keep straight faces and to seem/act natural while I was taking pictures. This is understandable, as most people I know would feel a little uncomfortable being directed to sit and stand and pose in the entrance to a major University building (passersby seemed appropriately weirded-out as well). Those complications aside, I was very happy with the final product of the shoot. I liked the overall angles, framing, and dramatic elements in each of the pictures, which is what the project was primarily about. Just don’t focus too much on the facial expressions. 🙂 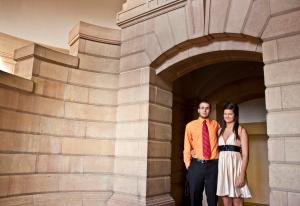 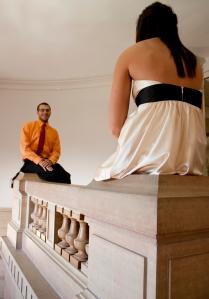